Measure your personal cultural preferences and compare them to the culture of a selected country.

What do we mean by "culture"?

Culture is one of those words that carry a number of meanings. Professor Hofstede defined it as: The programming of the human mind by which one group of people distinguishes itself from another group. Culture is learned from your environment and is always a shared, collective phenomenon. By reading this article, you'll learn more about what we mean when we talk about culture. 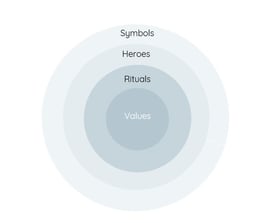 Culture consists of various layers and we often compare it with an onion. On the outer layer of the onion, you'll have symbols, such as food, logos, colours or monuments. The next layer consists of heroes, and can include real life public figures, like statesmen, athletes or company founders, or figures such as Superman in popular culture. On the third layer, closest to the core, you´ll find rituals, such as sauna, karaoke, or meetings.

Rituals are recurring events which shape our unconscious minds. They exists both in society (e.g. celebrating Independence Day, Thanksgiving, tipping in restaurants, etc.) and in organisations (e.g. meeting practices etc.).

Heroes are people who have shown behaviour which showcases, for example, the national spirit (e.g. Steve Jobs or important politicians). Or, within organisations, heroes show behaviour that sets the example. In some cultures, heroes can also be the “anti-hero” - they can be the example of what not to do.

Symbols are items such as eating habits, foods, flags or colors. In the organisational setting, by symbols you might think about the logo of a company, for example. Symbols have emotions attached to them. But changing the symbols usually doesn't have a long lasting deep emotional impact, as for example changing rituals might. Imagine having moved from one organisation to another and facing a new way of conducting meetings. How long does it take you to get over the uneasy feeling in your stomach?

At the core of culture, you´ll find values. Values are broad preferences for a certain state of affairs (e.g. preferring equality over hierarchy). Values are transmitted by the environment in which we grow up, like the behaviour of parents or teachers showing us what is acceptable and what isn't. Values are pretty much shaped by the time we hit 10-12 years of age.

This collective programming, consisting of values as the core, and the three layers surrounding that core, is what we mean by culture. Issues with culture don't usually pop up when everything goes well – it is when we feel threatened or uncomfortable that we have a tendency to go “back to basics”. Back to the values instilled within us when we were young.

As culture is a group phenomenon, we use it to analyse the behaviour of groups and make an assessment of the likelihood of groups of people acting in a certain way. One person doesn't represent the whole culture but in a group of people from one culture, people are likely to act in a way appropriate for that culture.

From a business point of view this makes The Culture Factor an important tool of management, with regards to groups of people. While you cannot change values of people, you can make appropriate changes in the practices of your organisation to ensure you’re working with those cultural values, rather than against them. To learn more about how to manage culture in an organisational setting, we recommend reading more about Organisational Culture.

Editor's Note: This post was originally published in February 2019, and last updated in November 2022.

Hofstede Insights enables you to solve Intercultural and Organisational Culture challenges by utilising our effective and proven frameworks.

General information
8:00AM and 16:00PM CEST
Use our contact page or
sales@hofstede-insights.com