Measure your personal cultural preferences on Hofstede’s 6D model, compare them to the culture of a selected country and become aware of cultural pitfalls.

A few weeks ago we had a conversation with Wouter Van den Berghe the Research Director of Vias institute in Brussels and Michael Schachner, Head of Research at Hofstede Insights, on a recently published article on how National Culture impacts the level of public support for policy measures in road safety.

I am going to start by asking you to tell us a little bit about you and your organisations.
Wouter: I am Wouter Van den Berghe from Belgium. I have been a consultant most of my life. For the last seven years, I have been the Research Director of Vias institute in Brussels.

Michael: My name is Michael Schachner. I am Head of Research at Hofstede Insights, based in Helsinki. I’ve been with the company since 2008.

W: The Vias institute, previously called the Belgian Road Safety Institute, is a private company with a public goal. It has over 130 employees and is mainly active in the field of road safety, but increasingly also in the field of mobility and security. Since seven years, I specialise in road safety issues, and most of my life, I undertook consulting assignments for governmental agencies and non-profit organisations, which makes me quite familiar with the area of policy-making. Moreover, I am currently pursuing a PhD at UCL in London on “Ethical and fairness aspects of road safety policy-making from an intercultural perspective.”

M: Hofstede Insights is a consultancy specialised in intercultural management, organisational culture and cross-cultural research. As Head of Research, I am involved with all research projects for which we get hired. These projects are mostly about the impact on culture on “something”. This also requires an expert on the “something” – in this case, this “something” is road safety, and the expert is Wouter.

Why was this research conducted and how are culture and road safety related to each other?
W: There is overwhelming evidence that “road safety culture” has an impact on road safety performance, i.e. the number of fatalities and injuries caused by road crashes. People who speed, drive drunk or do not use a seat-belt, have a much higher probability of getting injured on the road – and of causing accidents in which others are hurt. Road users with less risky attitudes will be involved in fewer accidents. This relationship is well established. However, little has been researched about the relationship between support for policy measures in road safety and culture – especially not in an international context

Our analyses clearly show that the more individualistic a culture is – in other words, the higher the percentage of people for whom independent thought and decision making matters a lot – the higher the resistance against policy measures that are restricting individual freedom. We examined this in the context of road safety – by combining Hofstede Insights’ data on national culture with findings from the international ESRA survey on road safety culture, a survey that included questions on the support for policy measures. However, we think that our findings are also relevant to other policy areas.

M: It’s worth mentioning that we used both Geert Hofstede’s original data as well as data collected during a research project in 2015/16 which replicated the Individualism and Long Term Orientation dimensions. The charts shown as examples use these latest Individualism scores.

W: One of the possible policy measures investigated was the legal obligation for all cyclists to wear a helmet. As the figure illustrates, the higher the Individualism, the higher the opposition against the measure. The level of support for this measure is remarkably high since an obligation to wear helmets only exists in a few countries, and in most countries, the majority of cyclists is not wearing a helmet.

In the article you mention a paradox - Individualistic cultures are safer, but they have a less positive attitude towards safety measures. Can you explain why that is?
M: This was actually a somewhat surprising finding. One would indeed expect that in democratic countries which are more individualistic – and where the resistance against measures is higher – fewer measures get implemented. Yet, the opposite seems to be the case. This can be seen very clearly in one of the charts of the article, showing the fatality rates of a country and the Individualism score. 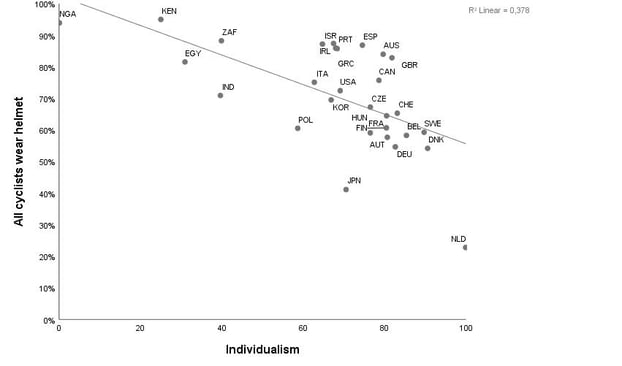 We see three possible explanations for this phenomenon:

Can the insights of your research be used to make roads safer?
W: Yes, but indirectly. An interesting finding is that, despite the resistance of a part of the population to freedom-restricting measures in the field of road safety, the majority of the population is still in favour. So the level of public support for these measures is often higher than what policy-makers think. Often policy-makers are afraid to implement measures because they fear their electorate will turn against them. But in the field of road safety, the opposition is often weaker than they think.

What is the biggest takeaway for businesses?
M: Businesses tend to have internal policies, and they sometimes need to be adjusted. As an example, imagine HR wants to forbid people to wear outdoor shoes in the office. Just like with road safety, it can be expected that the initial resistance against the new policy will be greater in individualistic countries. In less individualistic countries, employees are less likely to protest openly. However, once a policy in an individualistic society has been implemented, people are more likely to behave accordingly. This may also be related to the high sense of equality in individualistic societies – rules are valid for everybody and nobody should get away with a special treatment.
In collectivistic countries people are used to exemptions, especially for power holders. It is more difficult to make everybody obey them. This may mostly be because of a lack of enforcement – nobody in collectivistic countries will tell their manager not to wear shoes inside the office.

Are there any practical applications? Can the implications of this article be used for practical applications in the businesses and/or other industries?
M: Everywhere in the world, people will obey rules either because they make sense to them personally, or because they get strictly enforced. When introducing new rules or policies, you need to appeal to either one of these elements, ideally to both. At some point, they will start to reinforce each other. Seat-belts didn’t make sense to people initially. In many countries, wearing a seat-belt was strictly enforced. In these countries, people nowadays wouldn’t want to drive without wearing them anymore, even without enforcement.

One general learning point is that you should not give up on something just because there is resistance. The resistance itself could be cultural, it may not even mean that people are against what you are proposing. In individualistic countries, people value their freedom and may oppose something just for the sake of it. This could be valuable information especially for people from collectivistic countries when working in individualistic ones.

Will you continue to do research in this area?

I am also involved in another project in which data from 12 countries or regions across the world is brought together in order to analyse what factors at individual level – including personal values, attitudes towards other people and society and behaviour in traffic – are related to support for – or resistance against – policy measures in road safety, in particular when these are seen to restrict freedom.

Editor's Note: The work discussed here continued, and a peer-reviewed article "The association between national culture, road safety performance and support for policy measures" was published via IATSS Research in October 2020.

to  , Monday to Friday
support@hofstede-insights.com