Measure your personal cultural preferences and compare them to the culture of a selected country.

Flexible Organisational Culture - How do you create it?

'The world is entering a transformative era. Prepare for more chaos and instability', wrote Professor Walter Russell Mead for The Wall Street Journal in August 2020, emphasizing the growing need for faster reponse times and flexibility. We’ve often been asked questions such as: ‘What is adaptive culture?’, ‘What is a flexible organisation?’, even ‘Why do we need flexible working?’ The answer to the last question has now become all too clear, at the same time making the first two more important than ever. In this article we will explain what having an adaptive or flexible culture really means as well as advice on some concrete actions you can take to get there. If you feel you’re not yet familiar with the elements of Organisational Culture, we recommend reading this article first.

The right amount of flexible

Generally speaking , due to their necessity of strict safety requirements, Oil and Gas companies might not sound like a great example of a flexible company. In order to mitigate risks, these types of organisations have to focus a lot on how people do their jobs. In many cases, these organisations require internal risk auditors or other compliance measures to make sure employees complete their tasks in a precise way.

What is a flexible organisation?

A flexible organisation can adapt to new, unexpected challenges quickly and effectively. In our data-based approach to Organisational Culture, flexibility is mainly characterised by two dimensions of the Multi-Focus model™:

In a Goal-oriented culture, what matters the most is the outcome. Employees strive to achieve internal goals and results, sometimes even taking risks to achieve those goals. People focus on what is being done.

In the graph below, you’ll find an overview of what kind of behaviour you might expect in organisations along different parts of this scale 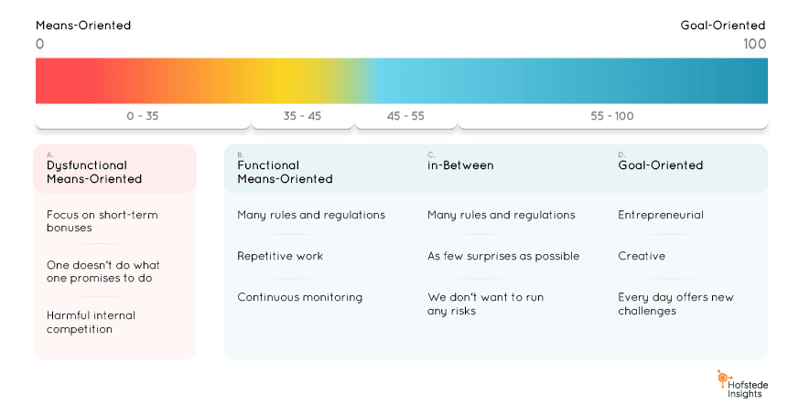 If you want your organisation to be as flexible as possible, you should aim to be as Goal-oriented as you can. But remember, Organisational Culture should always support your overall strategy. That means that being as Goal-oriented as possible doesn’t always mean aiming to score 100 on Organisational Effectiveness. It means aiming to score as high as possible, taking into account the restrictions you might have. Optimal does not mean maximum. It means a strategic decision on where you need to be in order to execute whatever strategic goals you might have.

The Oil and Gas companies mentioned in the earlier example might want to increase flexibility by avoiding unnecessary rules. Nevertheless, they would still normally want to score fairly low (fairly Means-oriented) out of necessity. This is because they are legally required to focus also on how things are being done.

The emergency crews mentioned before would want to score much higher (more Goal-oriented) on the scale, so they can focus on the goal of extinguishing the fire or saving the people. Yet, even they wouldn’t want to reach the goal regardless of the consequence, but would instead want to reach the goal safely, still following some rules and regulations.

As with all Organisational Culture change, there are dozens of ways to increase Organisational Effectiveness. One of the challenges is to find the ones that best fit your organisation. For instance, decreasing the number of hierarchical levels in the organisation tends to increase Organisational Effectiveness. This is because the focus will shift more towards what is being done, instead of how it’s done. Decreasing the number of levels, is not always possible, might not be a good fit with the National Culture, or might have an undesirable effect on another dimension. In these cases, you could consider downplaying the importance of the hierarchical structure instead of changing the structure. There are no universal solutions but there are a lot of alternatives to choose from.

We measure Control as ranging from Easy-going to Strict work discipline. A very easy-going culture has loose internal structure, little control and discipline, and lacks predictability. People are free to improvise a lot and, as a result, there are many surprises. In a very strict culture, there is a great deal of internal control. People focus on being cost conscious, punctual and serious.

In the graph below, you’ll find an overview of what kind of behaviour you might expect in organisations landing in different parts of the graph. 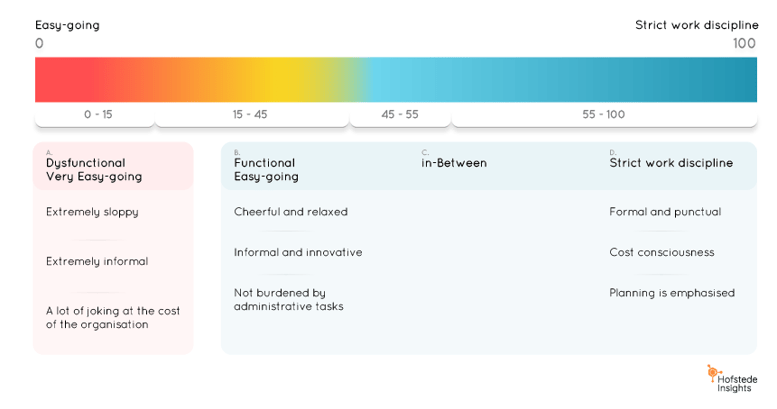 When aiming for a flexible culture to thrive and succeed, organisations should have a culture more towards the easy-going direction. Again, this isn’t as easy as simply aiming to score 0 (Easy-going) on this dimension. Most often there is a need for some control, like working-hours or some form of reporting, even for the most easy-going teams or functions of your organisation.

How to decrease Control and move towards an Easy-going culture

In certain contexts, loosening Control may sound impossible but that’s rarely the case. For instance, if the tasks of the employees require a lot of precision, it is usually possible to loosen Control by ensuring that people, when facing difficulties, are able to independently check resources such as guidelines, manuals or instructional videos, instead of asking from their supervisors. This can be especially useful for virtual teams where maintaining control can easily become even more strict than with local teams.

Again, it’s important to keep in mind the implications of the changes. There are no solutions that fit every organisation. Flexible work hours are not possible in all industries or professions, informal meetings do not work in every country or culture and it is possible to try and promote a relaxed atmosphere but end up increasing control instead.

Flexibility through Organisational Effectiveness and Control

We’ve now established that when aiming for flexibility, you want to have a fairly Goal-oriented and Easy-going Organisational Culture. But flexibility comes from the interaction of these dimensions together. The graph below depicts the general outcomes of the combinations of these two dimensions: 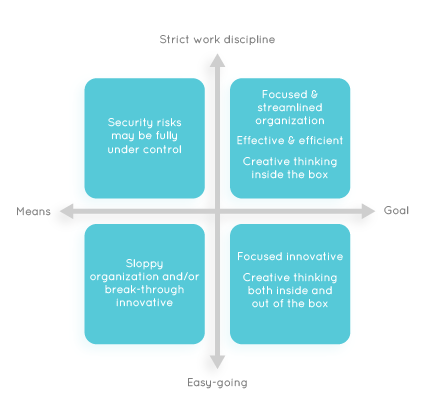 Flexibility requires easy-goingness to ensure people can think creatively and on their feet. At the same time, in most teams, you also need a goal to direct the efforts of these very easy-going workers. Just remember, the more rules and practices you implement, the less the people will be able to think for themselves and be flexible.

Two of the biggest challenges we see in organisations trying to implement agile ways of working is that organisations are either too Means-oriented or not Easy-going enough. If the organisation is Easy-going but not Goal-oriented, it often results in unclarity, paralysis and a waste of resources due to the lack of direction. People aren’t sure what they should be doing. Organisations that are Goal-oriented but not Easy-going enough tend to increase efficiency but not effectiveness. People do their work more efficiently but they won’t find new, potentially more useful, solutions to their problems.

The interest organisations have in becoming more agile is a popular topic but what is the reality of the situation? Over the past few years, our research shows a rise in Organisational Effectiveness. 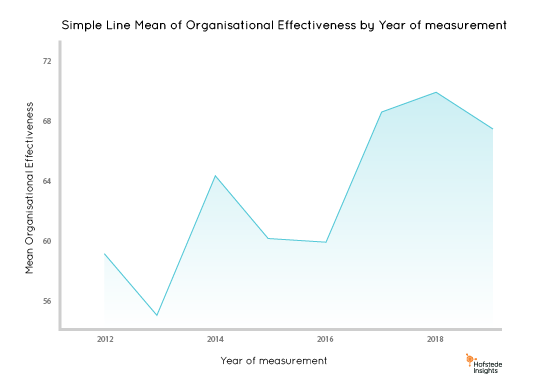 On the other hand, the same tendency towards more agile organisations is not supported by the changes in the average score on the dimension of Control. The averages in the Control scores have been rising, indicating that organisations have been becoming less Easy-going. 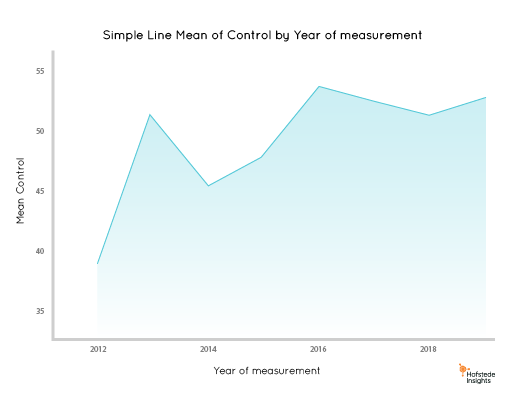 When we think about it, the trend explained is not surprising. In fact,  it underlines one of the paradoxes we often face: many organisations want to become more flexible but also want to increase Control, in order to avoid surprises. However, avoiding surprises isn’t flexibility; Flexibility is the ability to deal with the surprises.

Hofstede Insights enables you to solve Intercultural and Organisational Culture challenges by utilising our effective and proven frameworks.

General information
8:00AM and 16:00PM CEST
Use our contact page or
sales@hofstede-insights.com